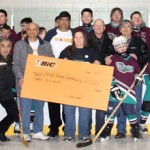 On Saturday February 11 several members of BIC Canada’s Green Team came to Grandravine for the formal cheque presentation. Some were seeing for the first time how the money they raised was being spent. They were very impressed with the dedication of the coaches in the skills group. Then they watched a game between teams three and four and were further amazed at the level of hockey being played. In 2011 this group of employees along with BIC Canada raised $3000 for Grandravine Special Program. They should all be proud of the part that they played in making this program possible.

« Voting Instructions
Grandravine in Finals for TEAM UP FUND!! »