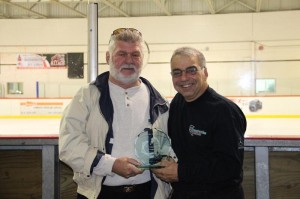 It was kind of fitting that the 30th Anniversary Celebrations took place on November 13th, just after rembrance day. It was a day for remembering, but remembering happy events, and the wonderful people that started it all 30 years ago. Joe Rizzuto managed to pry Pat Flick from “Paradise” (somewhere north of Parry Sound) to take take part in the festivities. While Pat has retired everyone recognizes the legacy he left behind. After starting the Grandravine Tornadoes, the first Special Hockey team of its kind, he went on to co-found, along with Tony Sansone of St. Louis, the first Special Hockey tournament and eventually Special Hockey International. Joe presented Pat with plaque of appreciation for his many years of service. 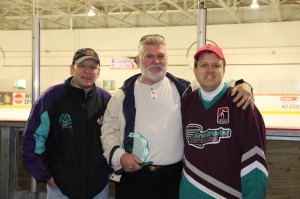 Following that Pat was reunited with the 2 kids that he started this program for, Ryan Inwood and Jim Graziano. Thirty years later Ryan is still an active player at Grandravine while Jim recently retired to raise his family along with his wife Pierette and their lovely daughter Sarah. Jim and Pierrrette met while both were playing at Grandravine and eventually married at centre ice. Talk about a hockey family. 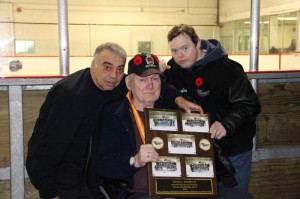 When we talk about contributions to this organization we have to talk about Hefford Selby, better known as Heff. Whether it was coaching or making coffee or looking after the equipment or anything else that needed to be done, you didn’t have to ask Heff twice. In fact you didn’t even need to ask him once. If Heff saw that something needed to be done he just went ahead and did it, tirelessly and always with a smile. Heff was still on the ice well into his seventies and while he had to leave active participation a few years ago after being confined to a wheelchair he is still very much a cherished member of the Grandravine family where continues to make his presence felt. A plaque acknowledging his contributions was presented.

In the tradition that was started by Pat Flick and epitomized by Heff, the many volunteers that work behind the scenes to make Grandravine Special Program the success that it is were also recognized. In memory of Ilonka Seder Szabolsci and Miklos Szabolsci comemorative pins were presented to all the volunteers.

Following a group picture refreshments were served by some of our tireless volunteers. After cutting the cake Pat and Heff remenisced with their many friends at Grandravine.

See the story in the North York Mirror