On November 4, 2014 the North York Mirror handed out its annual Urban Heroes awards for community service. Our very own Joe Rizzuto was a recipient. From the entire Grandravine family, we want to congratulate Joe for a very well deserved recognition. It is hard to think of many people who have given as much back to their community as Joe has with his work for Grandravine. For the full story on the Urban Heroes awards follow this link. http://northyork.urbanheroes.ca/

Below is a profile piece on Joe reprinted from the North York Mirror. 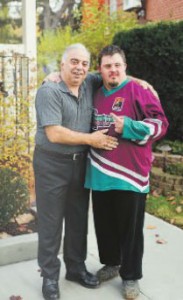 Staff photo/NICK PERRY
Joe Rizzuto, left, and his son, Mark. The elder Rizzuto joined the Grandravine Special Program 21 years ago and has been president of the program since 003.

Joe Rizzuto first signed up as a coach with the Grandravine Special Program for people with developmental disabilities 21 years ago when his son, Mark, who has Down syndrome, wanted to play hockey.

Soon, he was involved in fund-raising for the league.

He then became a director before taking over as president in 2003 when founder, Patrick Flick, retired.

There are now 95 players with the Grandravine Tornadoes, both male and female, ranging in age from six to their mid-60s, some of whom live in group homes.

The Grandravine Special Program has inspired similar leagues in the United States, the United Kingdom, Norway and Sweden.

“He’s the best guy I can think of. He’s amazing, what he does,” said Evola, whose 31-year-old son, Francesco, who is developmentally delayed, is involved in the league.

The program has been operating out of the Grandravine Arena in the area of Sheppard Avenue and Keele Street, since 1980.

Flick had a dream that ice hockey should open its arms to those with developmental delays.

While the players’ challenges are a factor, the focus is on their abilities and the fulfillment and self-confidence they get from playing and making friends.