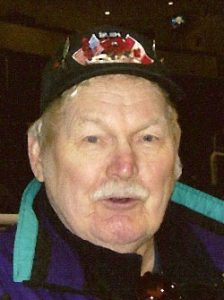 The first day I walked into Grandravine Arena, obviously looking a little lost, this boisterous, smiling, yet somewhat gruff looking man came right up to me and asked “Can I help you?”. That was Heff. As I got to know him a little more I began to realize that “Can I help you?” was not just his way of being polite to a stranger, but rather it was his way of life. That is how he was with everyone. Without ever waiting to be asked he just went about doing whatever was required. He never looked for gratitude or recognition. He just wanted to help. 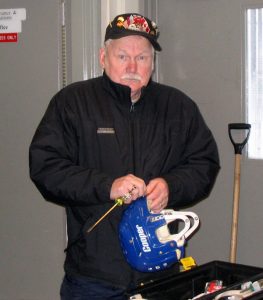 Always the first one in, on Saturday mornings, he made sure there was always coffee ready to go. If someone needed their helmet fixed he had his toolkit handy. He took care of all the equipment for Grandravine.  Then he would put on his own skates to go out to coach, well into his seventies. Heff was the epitome of a selfless individual whose only reward was the the smile on a kid’s face.

Heff first came to Grandravine for his son Gord, who played with the Tornadoes into his forties. Along with his wife Flora they relished the closeness that was the Grandravine family. Whether it was for a fundraising BBQ or team banquet or a Parry Sound weekend they were there, and always ready to do whatever was needed to make these events happen. 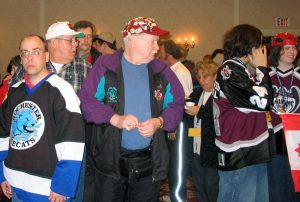 Heff always looked forward to the SHI tournament every year. He like to re-visit with his longtime friends from St. Louis where the first tournament was held, and to meet new friends from around the world. A long time tradition at these tournaments, trading team pins with players and coaches of other teams was a passion of his. His pin-filled hat was iconic, and the envy of every SHI player.

Heff was also particularly fond of the Parry Sound weekends that brought the Grandravine family together at a “summer camp” in the middle of February. Isolated from daily activities and temporarily relieved of schedules and appointments and the many other stresses of our lives, this weekend was a reflection of all that was positive in our lives and an opportunity for everyone to bond a little closer. No one appreciated that more than Heff did.

As her dementia progressed Flora remained at home, where Heff cared for her, until her needs were so much that she was admitted to a nursing home in 2007, where she died the following year. While caring for Flora at home, he never missed a beat at Grandravine, always there with Gord at his side. He continued to be both the spirit and workhorse of the Grandravine family until a stroke in 2008 finally slowed him down. While not able to continue his regular activities at the arena he still came out to visit and attend events such as our banquets and golf tournaments.

In 2010 at the 30th anniversary of Grandravine Special Hockey’s founding Heff was presented wit a plaque to commemorate his years with Grandravine and all that he brought with him. His tireless work and selfless spirit will not soon be forgotten. 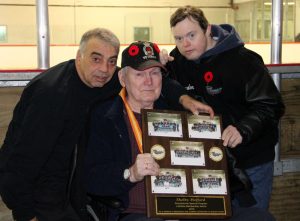 In July of this year his son Gord passed away. While he still had his four daughters, Carol, Margo, Jane, and Gayle, close to him, this left a big hole in his life. On Nov. 4, 2018 Heff passed away joining Flora and Gord.

Thank you, Heff, for being part of out lives!