When Grandravine Tornadoes 4 were told they were playing in Baltimore they had to make sure that their GPS was set for Baltimore, Ontario – not Maryland. The host Northumberland Lions were great hosts resulting in an exciting game between one of the newest teams in SHI and the oldest. 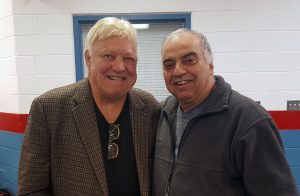 But the Lions had a surprise in store for everyone – Bobby Hull. One of the greatest stars of the NHL, he took a little time out from his promotional tour to visit with our players. Everyone was thrilled to see him, none more so than our own, “mis-guided”, Black Hawks fan, Joe Rizzuto. The grin on his face said it all.

Ever generous with his time, Hull took time to sign autographs and take pictures with everyone. Accompanied by Norhumberland MPP, David Piccini, he chatted with the parents and showed off both his Stanley Cup and Avco Cup rings.It’s not clear how many of our players knew him but when asked, Mark Liotta replied “Yes. He’s Brett Hull’s father.” 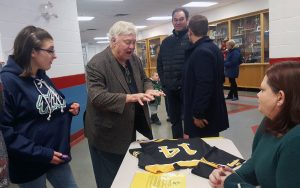