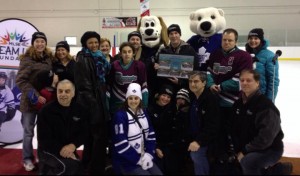 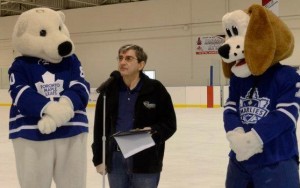 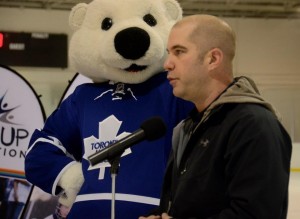 had this to say, “We’re here to celebrate our investment through the MLSE Team Up Foundation, the Marlies and The Leafs, and The Grandravine Special Program. Our foundation has been funding this special needs hockey program since 2006 and last year we helped refurbish the arena where they play out of.” 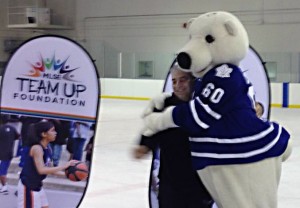 Speaking for all the players, Grandravine president Joe Rizzuto, recognized the impact that the support of Team Up has made on the Tornadoes program making hockey accessible to those with special needs. Then he and the other members of the Grandravine executive presented the Team Up group with Tornadoes toques. Responding to this jesture Team Up forgave Joe for being a Black Hawks fan and said that it wouldn’t keep them from supporting the program. 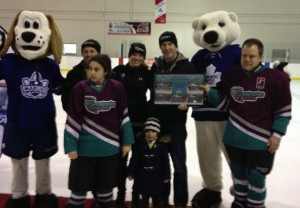 One of the highlights of the day was the presentation by Ryan Inwood (One of the two original Grandravine players) and Cristina Russo (One of our newest players) of a plaque to Michael Barlett, commemorating the partnership between Team Up and Grandravine Special Program. 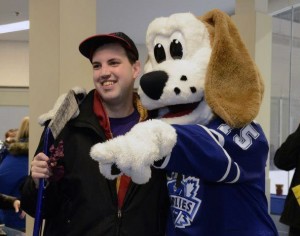 As luck would have it Team Up Day at Grandravine coincided with opening day of the shortened NHL season. So with the formal part of the event out of the way, Michael Bartlett asked all the Grandravine players to throw their sticks onto the ice. Then Carlton walked over picked out one of the sticks and presented it’s lucky owner, Eric Seguin, with 2 tickets to the Toronto Maple Leafs home opener. Needless to say he was one happy young man. 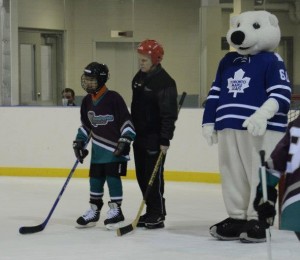 Then it was time for the young players that are part of the Skill Development Program at Grandravine to take to the ice. Duke and Carlton acted as honourary coaches – even if their style was a little unusual. I’m not sure how much the kids actually picked up from them but they were certainly thrilled with experience. 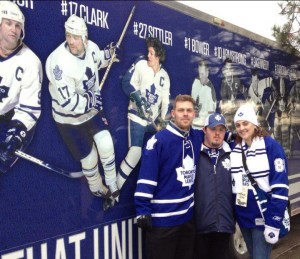 Meanwhile just outside the arena the Leafs Fan Zone Trailer, with their Leafs memorabilia and Marlie tickets give-aways, had people lined up all morning. Several sources tell us us that Joe was seen there repeatedly.

The days events ended with Michael Barlett dropping the puck for the game between Grandravine Tornadoes and the visiting Kawartha Komets. Carol and Doug Fisher of the Komets remarked how excited their team was with all the activities and the Leafs water bottles handed out to members of all the teams.

Photos are by Jessica Salvatore. Her video of the event can be seen at:
http://www.youtube.com/watch?v=a-ipQ1mv88w

Another video from Leafs TV:
http://www.youtube.com/watch?v=JxOeMIYApEw&feature=share&list=UUMrpTL3zZyNA5S1p9B3FhWg